The agenda for this meeting is linked.

A nomination form for anyone who wishes to propose a financial full member for a position on the committee is also linked.  The committee is currently one person short so please let another member know if you would like to be nominated, or if someone else would be good, ask if they would be happy to be nominated.  As a reminder, the NZARN rules state that we cannot have more than one employee of the same company or organisation on our committee.  Nominations can be sent to Trish Lewis before the AGM (by Friday 8th March).  Nominations can also be taken from the floor at the AGM.

If any one wishes to submit a resolution for consideration at the AGM, this must be submitted to the secretary no less than 14 days prior to the AGM.

For the who haven't yet registered for the upcoming meeting, please register and pay before Thursday, 28 February to get the discounted member fee.

Could not find route!

Weather data is currently not available for this location

Need help with your farming business? 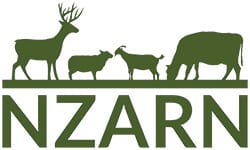